1930s Kitchen, a Permanent Exhibit at the Greenwood Museum 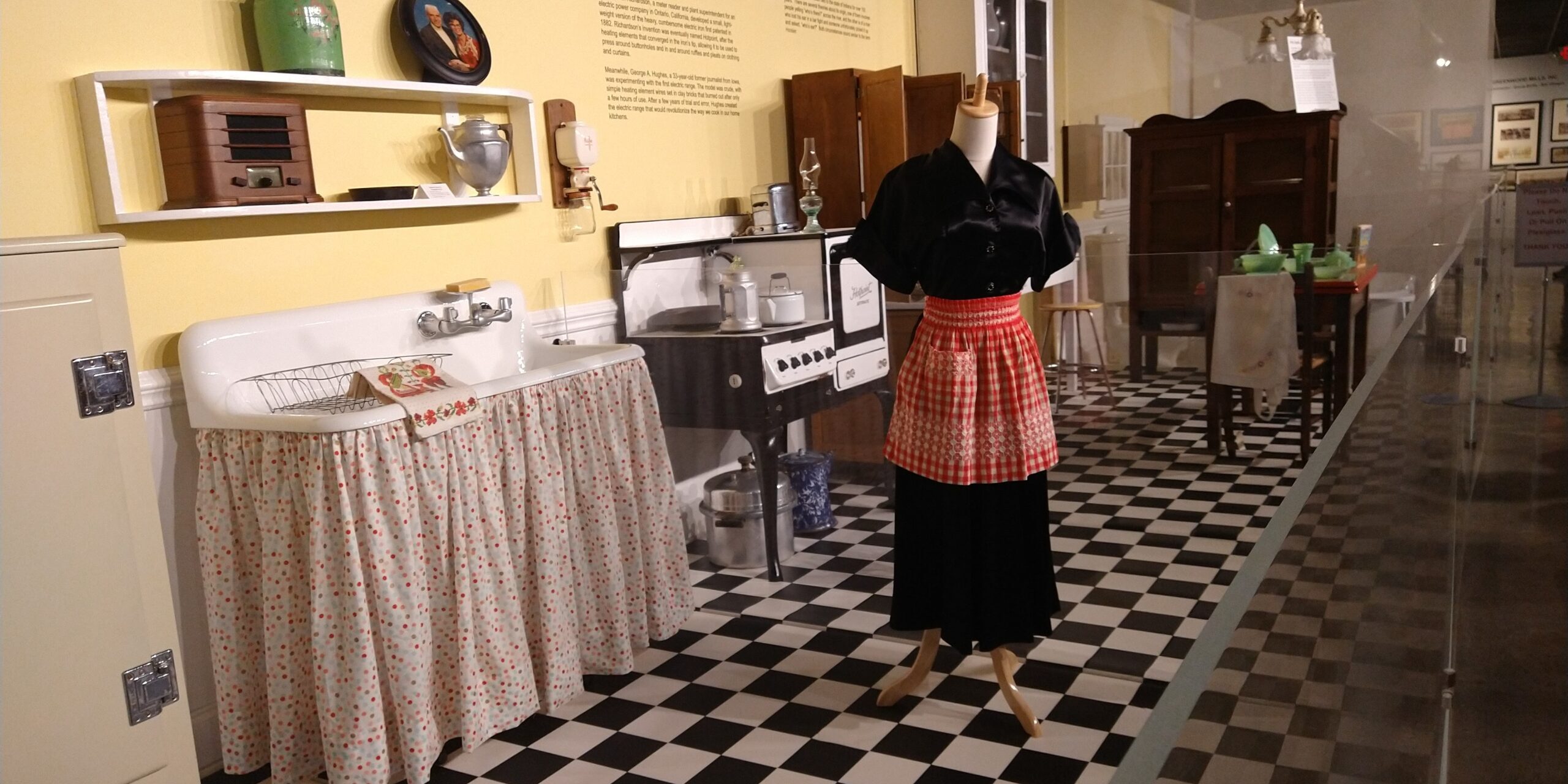 A year after they were married in 1966, Frank and Cate Townsend purchased the old Collins/Langston farm, also known as the “Graines Store and Residence,” located in southern Greenwood County. For nearly half a century Frank raised beef cattle and hay on the farm but worked full-time as a math teacher in the public schools and at various colleges. Cate took care of the house but served as a career library/media specialist in the public schools and established an internet business. They were also very active in the community.

Their simple farmhouse had been built of lumber cut from trees on the farm prior to the American Revolution. The original one-and-a-half story, squared and unchinked log structure was altered by various owners during its 200-year existence. However, the original ceiling boards, flooring, paneling, and beams downstairs are still intact. During a bad storm in 2018, seven large oak and pecan trees fell on the back of the house, reducing it to rubble. Repairs are now ongoing.

The original tract was part of a larger land grant given to Edward M. Rutledge of Charleston, SC, by King George III of England. He was the brother of John Rutledge and the youngest delegate to the Continental Congress. When South Carolina was in its infancy, both Edward and John occupied the governor’s seat. The Rutledges never lived on the land grant near Greenwood and later broke it into small tracts which they sold. The land was passed down or sold several times before the Townsends bought it in 1967. The couple furnished their historic home with family heirlooms and other pieces they acquired at antique shops and markets. 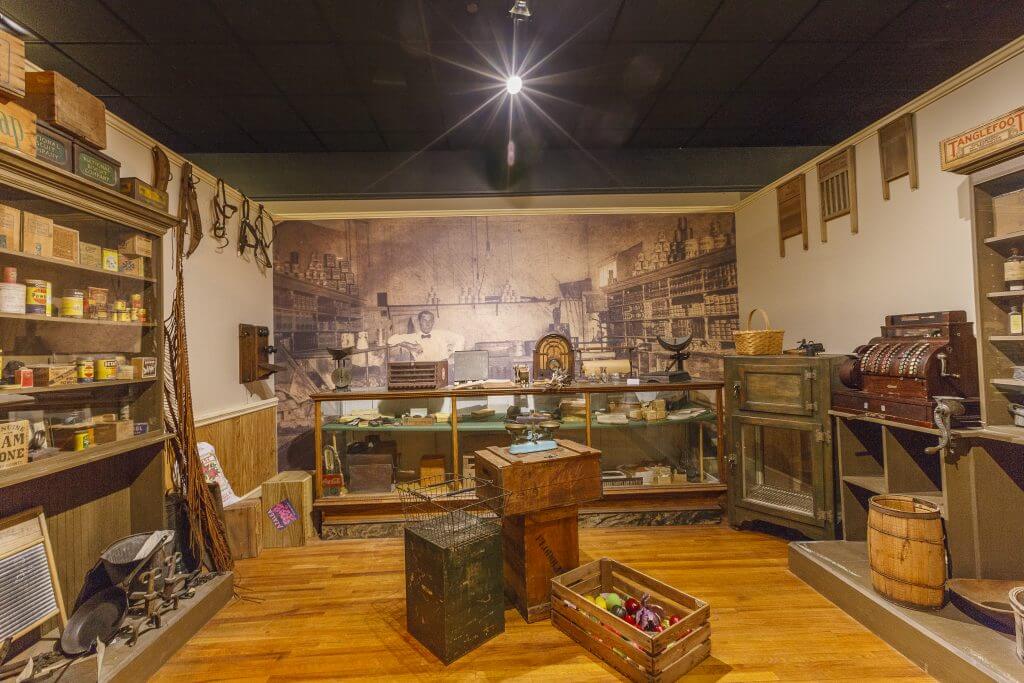 “Over the years Frank and I built up a good, but not outstanding collection of antiques and collectibles,” recalls Cate. “He was more interested in tools and farming equipment, similar to what he had experienced while growing up on the Croasdale Dairy Farm near Durham, NC. I was more interested in cooking and household items. Between those interests and the furniture we inherited from our families, our farmhouse became almost a museum.

“As we got older, we talked often about donating some of the more interesting pieces to our local museum in Greenwood,” she adds.. “While visiting the SC State Museum in Columbia sometime during the 1990s, I saw their new exhibit of rooms highlighting life at the turn of the 20th century. A kitchen from the 1920s made me realize we had just about all of those pieces in our home, including the stove where I cooked meals.

“After Frank died in 2014, I began thinking about finishing the undone projects,” Cate continues. “I contacted my friend Karen Jennings, executive director of the Greenwood Museum, and asked if they would be interested in expanding their exhibits. This discussion went on for a couple of years and then they began planning a series of exhibits focusing on the history of Greenwood and the influence of the cotton industry. A kitchen from the heyday of the mills was approved. I donated all of my pieces that fit the time period to the museum. In spite of Covid-19 and fund-raising delays, the exhibit opened in 2021 during the annual Festival of Flowers. An early 20th-century bathroom exhibit next to the kitchen features a few things from our collection, too.”

Mills was in peak production. Also featured are Hodges Drug Store, Blyth Funeral Homes, Index-Journal (newspaper), and The Countybank, plus an exhibit on Park Seed and NASA’s experiment with seeds in outer space. Also on display through the end of May on the main floor of the museum is an exhibit on the Brewer Hospital, which served the African-American community until the 1960s. A permanent exhibit on the Self Memorial Hospital will replace it. 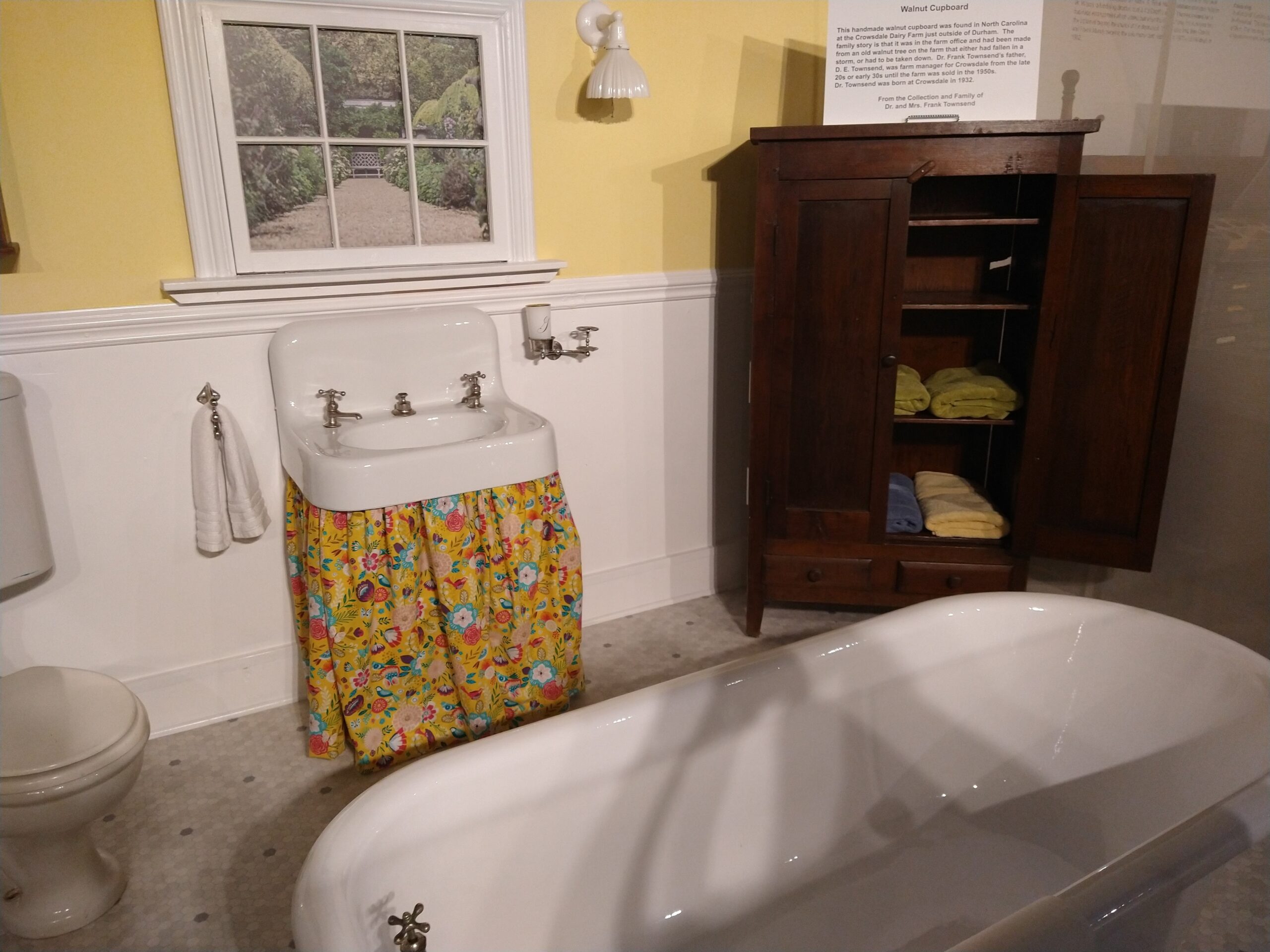 Marion Smith, exhibit coordinator at the Greenwood Museum, chose creamy yellow walls and a black-and-white checkerboard linoleum floor as a backdrop for the kitchen exhibit, which showcases the latest appliances and gadgets of the 1930s, as well as kitchen tools and accessories.

The General Electric Monitor refrigerator (Museum Collection) takes its name from the Civil War ironclad which made history fighting against the Merrimac (Virginia) ironclad during the Battle of Hampton Roads in 1862, The event ushered in a new type of warfare. The Monitor refrigerator was built on the French concept of a hermetically sealed refrigeration system and was first offered to the public in 1932 at the affordable price tag of $300 or $10 per month via a homeowner’s electric company. 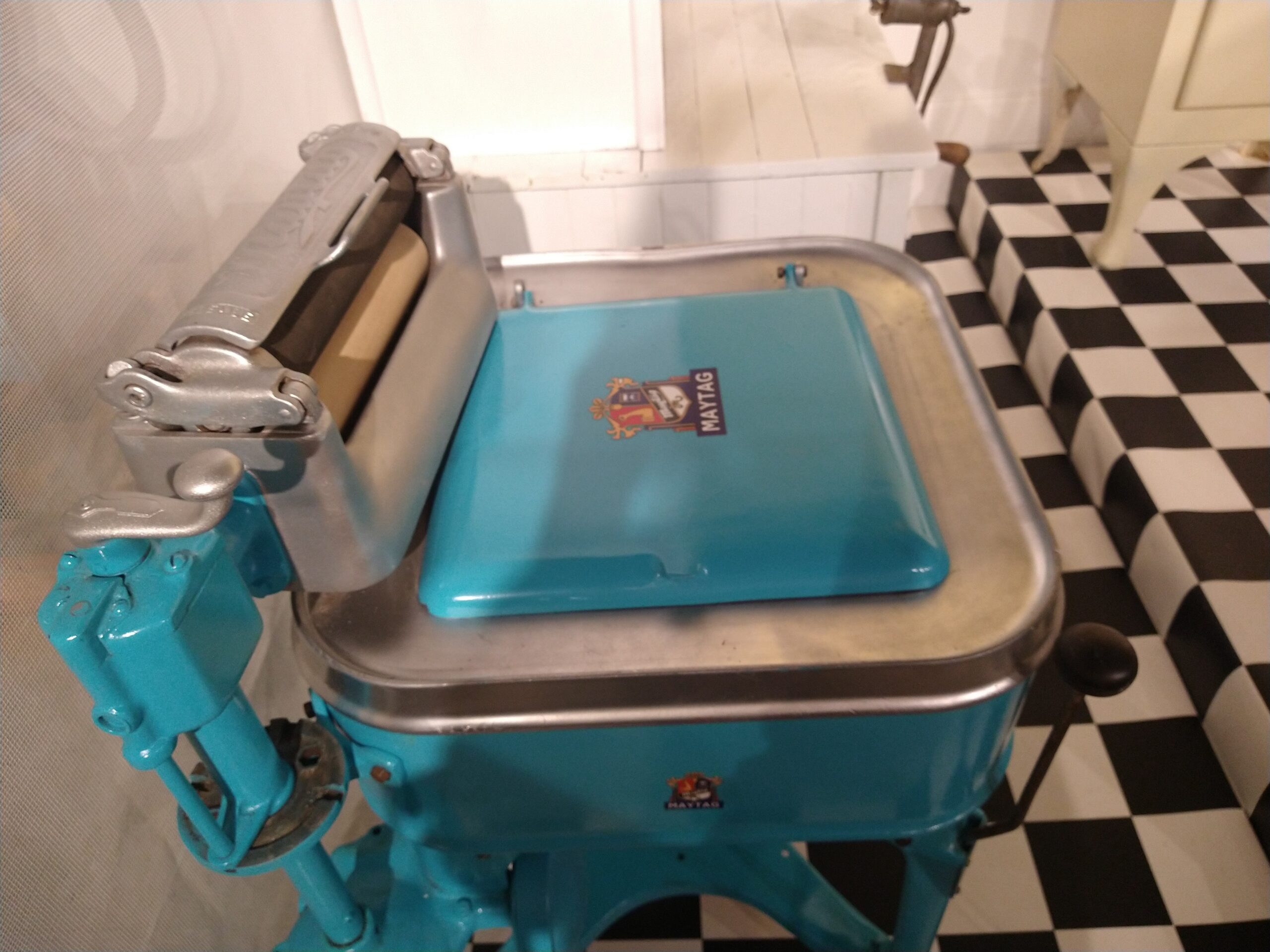 The Hot Point automatic stove (Townsend Collection) featured four electric eyes for cooking, an oven, and some storage space. George A. Hughes, an Iowa farmer-turned-inventor, had experimented with several stove models until he finally created a winning design that would revolutionize the way Americans cook in their kitchens. The name Hot Point came from an electric iron invented in 1903 by Earl Richardson, who worked for an electric power company. It was a lightweight version of a heavy iron patented in the 1880s.

The Maytag Wringer Washing Machine (Museum Collection) made its debut in 1927 and within five years the Maytag Company was rated Number One in the United States. Founded in 1893 by Frederick Louis Maytag and three partners in Iowa, the company originally made farm implements, specializing at first in the production of threshing machine band cutters and self-feeder attachments. Maytag bought out his partners in 1917 and focused on producing a washing machine of excellent quality. Eventually, Maytag became a household word.

The Hoosier cabinet (Townsend Collection) was used to store small kitchen items and appliances (sifters and meat grinders) and staples (flour and sugar). Named for the Midwest state of Indiana, Hoosier cabinets enjoyed great popularity from the 1920s through the 1950s, at which time built-in kitchen cabinets replaced them.

The pie safe belonged to Frank’s aunt, Elizabeth “Bessie” Covington DuBose. Popular from the early 1700s through the end of the 1800s, the pie safe was likely brought to America by German immigrants who settled in Pennsylvania. About the size of a large bureau, it featured deep shelves, long legs, and two front doors ventilated with punched tin or screen wire. Used to protect food from insects and vermin, the pie safe preceded the icebox in America but was still used for storage after refrigeration made its debut.

The radio (Museum Collection) was a popular item in 1930s kitchens. Families tuned in daily to listen to music and to hear the latest news and weather.

Since its installation last year, the 1930s Kitchen exhibit has become increasingly popular, according to Karen Jennings. “Visitors, young and old, love things that link them to their past experiences. They will say, ‘That reminds me of my mother’s kitchen or my grandma’s kitchen.’ The exhibit invites them to step into the past and experience everyday living in those times.” 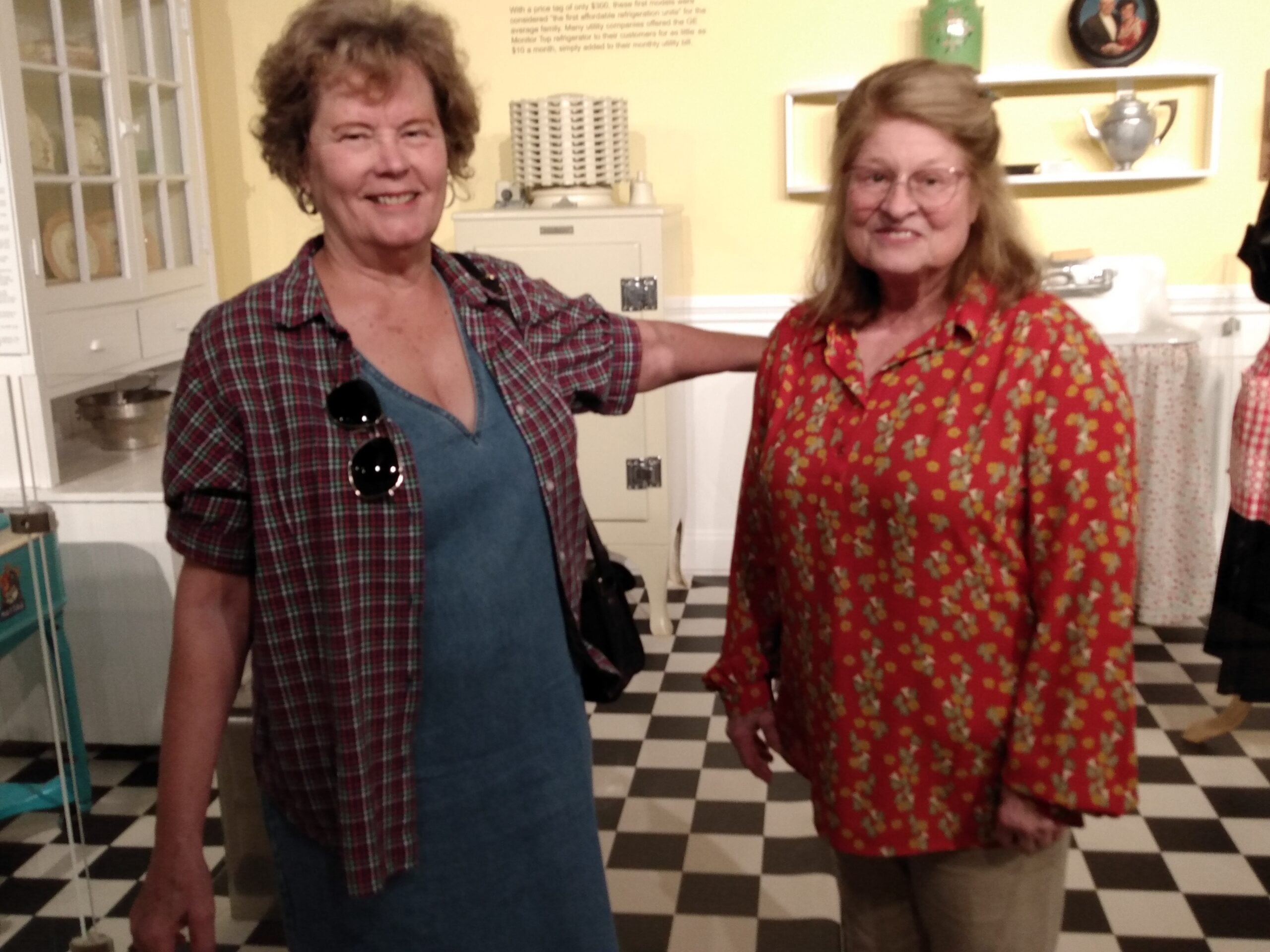 Carol Timblin is a Charlotte-based writer who is a professional travel journalist.

Timblin is also the recipient of a Charles Kuralt Award from the North Carolina Travel Industry Association and a Lowell Thomas Award from the Society of American Travel Writers.

The Greenwood Museum is located at 106 Main Street, N. in Greenwood, SC