The ABC’s of the Wild Turkey: Thanksgiving Table Talk 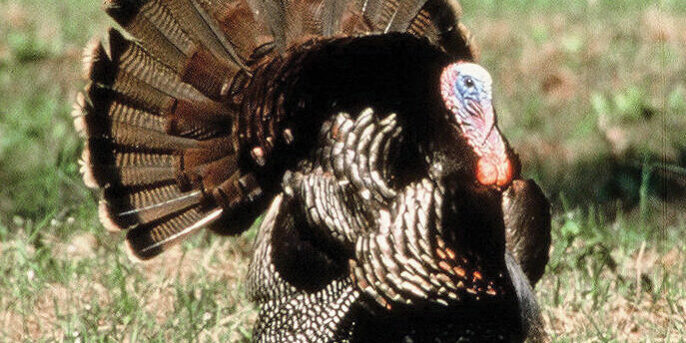 In case you want to dazzle the kinfolk over the dinner table at this year’s Thanksgiving celebration, here’s a heaping helping of turkey trivia-from A to Z!

This is the only state where wild turkeys can’t be found – not because it’s too cold, but because the state doesn’t have a long growing season. There’s just not enough food for turkeys to survive.

All male wild turkeys and between 10 and 20 percent of females have beards, which grow longer as the bird gets older.

A hunter’s tool, the turkey call was created by Native Americans and dates back about 4,000 years. The original calls were made from hollowed-out turkey bones.

This is one of the five subspecies of wild turkey, and it’s the most populous. Other subspecies include Florida (or Osceola), Gould’s, Merriam’s and Rio Grande.

This is the proper term for an adult male, who might also be called a “tom.” An adult female is called a “hen.”

Wild turkeys have an excellent sense of hearing, which allows them to detect a threat even when they’re intent on finding food.

A young male is called a “jake,” while a young female is a “jenny.”

Young wild turkeys are pursued by many predators, including bobcats, foxes and eagles. The most common killer of young birds isn’t another animal at all; it’s weather, as many die of hypothermia.

A male turkey scat looks like the letter “L” or “J,” whereas female turkeys poop in curly shaped mounds. (And yes, we’re delighted that we got to use the word “poop” in a press release!)

This is one of four feather colorations in wild turkeys, and it’s extremely rare. It features all-black feathers, like a raven would have. Other colorations include smokey-gray, albino, in which the bird has pink eyes and white legs; and erythritic, which is an overall red coloration.

The first people to see and eat wild turkeys were American Indians.

The Winchester Museum at the National Wild Turkey Federation maintains a collection of wild turkey rarities. These include birds with multiple beards,, multiple spurs, and “bumble toes”.

A baby turkey is called a “poult.” Females lay eight to 12 eggs at a time, perhaps six to 10 of those will hatch, and only about half of those will make it to adulthood.

Wild turkeys can run up to 25 mph and fly at speeds up to 55 mph. Domestic turkeys don’t run very fast and can only fly when they’re very young. So … score one for the wild guys.

Thanks to the efforts of the National Wild Turkey Federation, scientists track turkeys with radios that send out signals and let them know whether the birds are alive.

A male turkey looking for some attention from the gals will strut, dropping his wings to touch the ground, holding his tail in a vertical position, lowering his head and doing a little “dance” while making a spitting and drumming sound.

Turkeys can detect the same tastes as humans – sweet, sour, salty and bitter – but have very poor sense of taste because they don’t have many taste buds.

Native Americans ate turkeys, but also used their body parts for tools and decoration. A male’s spur could be used as the tip of an arrow. A feather adhered to an arrow made it fly faster and straighter.

Female wild turkeys can weigh between 10 and 15 pounds, and males can tip the scales at 20 to 25 pounds.

The wild turkey has been declared the state game bird for four states – Alabama, Massachusetts, Oklahoma and – of course – South Carolina.

Turkeys don’t live very long. Males may reach 10 years old, while females might make it to about six years.

Wild turkeys have some crazy-sounding parts. The “snood” is what you call that thing that dangles over the bird’s beak. The “carnucles,” are the red, fleshy bumps on the turkey’s neck.